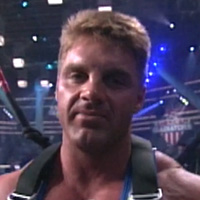 Tank appeared as an alternate Gladiator in three episodes during Season 5, standing in for an injured Laser. Although he only had a short Gladiators career, he made his presence known in Gauntlet, Pyramid and The Wall.

After initially trying out as a Contender in 1991, it was fellow Gladiator Zap (Raye Hollitt) that had persuaded him to try out again as a Gladiator in 1993.

A former Marine Corp. from San Diego, Tank left due to feeling uncomfortable by the Hollywood lifestyle, stating that he didn't want any kind of fame, he just wanted to compete.