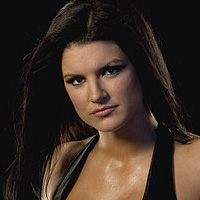 Don't let the winsome smile fool you... Crush earned her well-deserved moniker by smashing opponents into submission. Despite her girl-next-door looks, she's a powerful, fierce opponent who has no problem handling the women competitors, and then going back to breaking men's hearts.

Crush began her training with straight Muay Thai to competitive MMA, where she competed in Strikeforce and EliteXC. After racking up a competitive record of 12-1-1 in Muay Thai and a 7-1 in women's MMA, she received an offer to participate in the first ever female sanctioned MMA bout Strikeforce: Carano vs. Cyborg.

Since retiring from competition Crush has pursued a career in acting. Her film debut in Steven Soderbergh's 2011 action film Haywire earned a nomination for best actress in that genre at the 18th Critics' Choice Awards. Additional film credits include Fast & Furious 6 (2013), a starring role in In the Blood (2014), and played Marvel Comics fictional mutant character Angel Dust in Deadpool (2016).