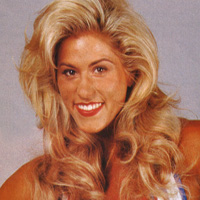 American Gladiator Siren was living proof that it is possible to turn a disability into an asset! Siren proved that the only thing she couldn't do was hear.

Siren became deaf at the age of three after an accidental aspirin overdose. She was diagnosed with profound hearing loss in the sixth grade after trying to hide it for years. She became a loner, as she could only understand her classmates if they were facing her, and soon began to use sports to deal with her frustrations. She would later learn sign language as well as getting several operations and speech therapy to help her deal with her hearing loss. With the help of lip reading and hearing aids she could finally enjoy her love of music, although she wouldn't have heard an atom bomb going off behind her without them! A standout heptathlete, gymnast, hurdler and cross-country runner in high school, she graduated with a degree in psychology and special education from Western Oregon State College.

An accomplished bodybuilder, Siren accumulated numerous titles including 1990 USA Championship and reaching the top three at the Ms. International/Arnold Schwarzenegger Classic (1991) and IFBB Ms. Olympia contests (1992). She retired from competition after placing 7th in the 1993 Ms. Olympia contest.

Siren impressed the producers of American Gladiators at her tryout when she did 57 pushups in 60 seconds, nearly double the average! Initially cast as an alternate Gladiator, she was called into action to replace Lace (Natalie Lennox). She excelled in most of the events, especially Tug-O-War, largely in part due to competing as a grinder on the America3 sailing team (the first all-women's America's Cup team). Siren was also extremely good at The Wall and Skytrack, having a near perfect record. She received visual cues from referee Larry Thompson as well as from fellow Gladiator, Elektra (Salina Bartunek), while competing. The audience would wave their hands in the air or stomp their feet, rather than applaud, to acknowledge her performances.

During her time at American Gladiators Orlando Live, she treated the audiences to a hand signed performance of one of her favourite songs, 'Heal the World' by Michael Jackson. She choreographed dance routines while learning to fully control and express her emotions through dance.

She was one of the few deaf professional female bodybuilders in the world, making the cover of DeafLife magazine twice in the 1990's, as well as the cover of Muscular Development magazine. She also appeared on numerous television shows such as 'Family Matters' and the film 'Hot Shots, Part Deux' (1993) and created a clothing line that featured the hand sign for 'I love you' on the front. A portion of the proceeds went to the American Athletic Association for the Deaf.

Her athletic accomplishments were equalled by her dedication to children. She worked as a 'group home' counsellor, helping children who suffer from mental, emotional and physical impairments. She was also spokesperson for the Better Hearing Institute, in which she encouraged deaf people to "...follow your heart and know that the only thing you can't do is hear, that's all, so go for whatever you want, whatever you dream, and you will be successful too!".

Siren was formerly married to John Romano, her trainer, columnist for Muscular Development magazine and host of American Gladiators Orlando Live, but they separated after six years. She then moved to live on a farm east of Salem, Oregon, with girlfriend Julie Moisa. She worked with people with physical impairments, made drums and jewellery, and worked as a personal trainer.

For a long time she suffered from depression and was diagnosed with bipolar disorder. During a six-week stay at a psychiatric hospital, she attempted suicide by hanging herself, and sadly passed away three days later on the February 16th 2008, aged 39. She will always have the status as one of the most popular Gladiators and is a true inspiration for many, showing thousands of challenged kids and adults that it is okay to be different.