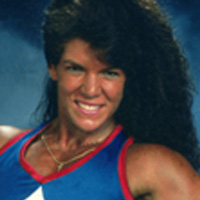 Jade joined the American Gladiators team in 1996 during the Orlando Live shows after originally trying out to be a Contender. She stayed with the show until it's closure in 1998, and proved to be a worthy opponent in Powerball.

At high school Jade was the only girl on the boy's soccer team and enjoyed playing softball and volleyball. She spent 6 years on active duty in the U.S. Army and attained the rank of Sergeant. Deciding to leave the Army in order to pursue a Bachelor's Degree in Health & Physical Education, with just one semester to go she was offered the job of a lifetime... to be an American Gladiator!

She became interested in bodybuilding whilst in the Army and won her first contest Miss Korea 1990, with many more bodybuilding achievements to follow.

Nowadays, Jade's passion is for rescuing American Bulldogs and she works in Real Estate in Florida.