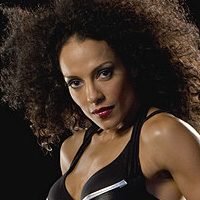 Cunning, quick and sleek, Panther stalks her prey with unrelenting force and terrifying precision. Possessing both the strength of a savage beast and the ruthless instinct of a predator, you stand about as much chance against her as a mouse does against a jungle cat.

The ferocious feline Panther made her debut during Season 2, Episode 7, of NBC's American Gladiators. Her debut event was Rocket Ball and she was a tough competitor in Pyramid and pouncing on the Contenders in Powerball.

Canadian born Panther competed in the second season of NBC's American Gladiators. She is a professional female boxer fighting in the junior lightweight division and made her debut on June 25, 1998. She was undefeated in ten professional bouts, with four knockout wins. In 2002, she was ranked number 4 by the International Women's Boxing Federation (IWBF) and the International Female Boxers Association (IFBA) and number 2 by the Women's International Boxing Association (WIBA).

Panther studied at Seneca College, Toronto, and played varsity soccer for a few years before graduating with a BA in criminology and English from Carleton University in Ottawa. She then joined the Ottawa-Carleton police force for three years before moving into personal training and stunt work. Panther took timeout from competition in 2004 to compete on the NBC's reality TV show 'The Next Action Star'. She was pitted against 13 rivals for a $25,000 cash prize and for a role in 'Bet Your Life', a made-for-TV action movie that screened after the show ended in August 2004. She has also been a stunt performer in Heroes (2007), Lost (2008) and the Ghost Whisperer (2006-2009).