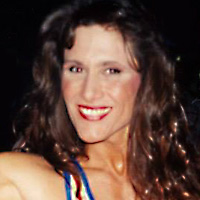 Jazz competed in the American Gladiators Live Tour in 1992. She didn't feature in the TV series.

Originally from Miami, Florida, the mother of four turned to the gym to get in shape in 1984. Jazz won her first heavyweight bodybuilding contest, Miss Florida, just a year later. She featured on her first magazine cover 'Strength & Health' in May 1985 and continued participating in bodybuilding competitions up until 1990, winning the NPC Florida Championships (1988).

She made her on-screen debut in the 1985 Italian action comedy 'Miami Supercops', followed by an episode of 'Miami Vice' in 1986 and Italian film 'The Opponent' (1988), alongside Ernest Borgnine. She also appeared in the music video for soul-influenced funk group Cameo for their song 'You Make Me Work', alongside Joanne McCartney.

A serious car accident in March 1991, ended her bodybuilding career. She sustained four broken ribs, a broken leg, a collapsed lung, lacerated liver and a fractured pelvis in three places. Amazingly, she recovered faster than expected due to her muscular physique and general fitness.

After slowly venturing back into the gym in April 1991 she was hired as Jazz in 1992 for the American Gladiators Live tour. Her sister, Debbie Shuman, was an alternate Contender on the tour, they were keen to go up against each other.

Nowadays, Jazz lives in Key West, Florida, and leads a quiet life amongst her children, Ashley, Breezy, Jack and Jerrid (who was a former footballer for the 'Golden Panthers' of Florida International University) and her grandchildren.