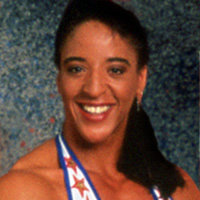 Storm was voted MVP in high school basketball and soccer and was named All-American in track and field. At the University of Nebraska, she ran track and field as a team-mate of fellow female Gladiator Blaze (Sha-ri Pendleton). Storm was also a member of the Southern California Cheetahs, a track club in Pomona. Outside of sport, Storm earned a degree in Psychology and went to Johnson & Wells University, where she earned a certificate in culinary arts.

In 1991, Storm was an aspiring member of the Olympic handball team with designs on winning the gold medal. At the Olympic Training Center, Colorado, she was watching the American Gladiators and knew she wanted to be part of it, initially wanting to be a Contender and go up against the Gladiators. Setting her sights on Hollywood, she travelled to LA and was spotted by Gary Parker, the assistant producer of American Gladiators. After successfully passing the tryout she received a phone call from the production team in which she was told her Gladiator name was Storm "because you blew us all away". Storm was brought in during the Fall 1991 season of American Gladiators to replace an injured Gold (Tonya Knight). She warned: "Contenders, when it rains, it pours. So watch out. The Storm is coming!".

In Gladiator arena, she excelled in Powerball and Joust where her upper body strength could really shine. Contenders certainly had a tough time trying to weather the Storm. As well as being one of the toughest Gladiators, Storm has a beautiful singing voice. In fact, she opened up the American Gladiators Live Tour by singing the National Anthem. But when the music stops, it's easy to see she's an intensely fierce competitor!

During the American Gladiators Live Tour in 1991, she snapped her ACL (anterior cruciate ligament) while competing in Powerball in Hartford, Connecticut. "I went to body slam a Contender, and when I had her up in the air, Ice deflected another contender into my left leg, so it was not only my weight and the velocity of the hit but the contender, and I totally snapped my ACL." she told AOL News.

Bonjour, mon ami.
My name is Storm. You see,
I'm too hot to trot, too sweet to be sour.
So push over contenders 'cause this is my hour.
My muscle physique shouldn't get you fooled.
I'm too much of a sweetheart, I could never be cruel.
But don't be fooled by what I say,
the last contenders who beat me will never be the same way.

In 2008 life took a sad turn for Storm, after fleeing a domestic violence situation South Carolina, Storm and her young son Clayton found themselves homeless on the streets of San Diego for more than two and a half years. They lived out of their car for a few days until she finally decided to check into a homeless shelter. She moved from shelter to shelter until finding herself in St. Vincent de Paul in Downtown San Diego. Unable to find work due to the knee injury she suffered during her time on American Gladiators. She had no family able to help her. "My parents died within months of each other," she said. "They were lottery winners but lost all that money because when they moved from Connecticut to South Carolina, they were double-taxed."

Storm met Sean Sheppard, the CEO of Embrace, an organisation that works to get people from all walks of life, but especially college students, to help the less fortunate, when he was handing out food to the homeless. He instantly recognised her, as he was a big fan of American Gladiators, and wanted to help Storm and her son. Three days after meeting Storm, Sean randomly met the sister of another American Gladiator, Laser (Jim Starr), who rallied his team of past American Gladiator cast mates, Malibu (Deron McBee), Dallas (Shannon Hall), Viper (Scott Berlinger), Zap (Raye Hollitt) and American Gladiator Creator and Executive Producer Johnny Ferraro, to support one of their own and get her and her son back on their feet.

Moved by her story other celebrities and members of the public stepped forward to help. Sherri Shepherd of ABC's talk show 'The View', paid for Storm and her son to have an apartment for 6 months to help get them on their feet. Dr. Dan Kalbac, US Men's National Soccer Team Doctor located in Miami, Florida, offered to perform knee replacement surgery on Storm to get her mobile and able to work again, while a local gentleman named Mr. Engelhardt offered to pay for her round-trip ticket to Miami to have the surgery.

"Homelessness does not have any prejudice... you can end up in the same situation, it doesn't matter." Storm, Debbie Clark.

Moving forward, Storm would like to be a spokesperson to help raise money in support of Embrace's efforts to serve the homeless. She intends to work with women, like herself, that have survived domestic violence and/or homelessness.