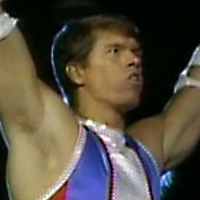 Bronco's Gladiator career was as an alternate, and he entered the arena in the first half as Season One as a replacement for the injured Malibu. His performance in Human Cannonball was credible, but Malibu returned shortly afterward, and Bronco bowed out.