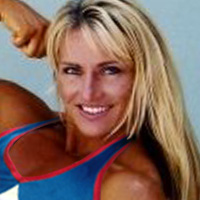 Flame applied to join the American Gladiators Orlando Live team after hearing from fellow bodybuilder Eddie Robinson that try-outs were being held. Her favourite event in the arena was Powerball. She is in a relationship with fellow Gladiator Quake.

She now works as an intensive care registered nurse at Florida Hospital whilst still competing in bodybuilding competitions.