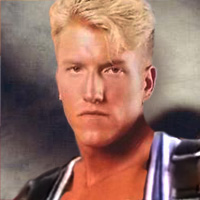 Atlas joined the Gladiators team as part of Season Four and competed in the International Challenge of Champions '92. Although his Gladiator career was short lived his best events were The Maze and Human Cannonball.

An accomplished actor, Atlas has appeared on TV in 'Silk Stalkings', 'The Ben Stiller Show' and the movie 'The Naked Truth' (1992).

He was one of the few Gladiators to come up with his own Gladiator name, with help from Zap. They felt the name Atlas suited him because of his large shoulders; they referenced Atlas the God holding the world on his shoulders. The producers liked it and Atlas was born. His favourite event on the show was Powerball.