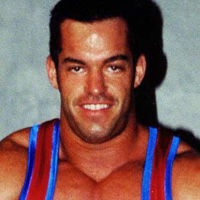 Quake was working as a general admin clerk in the offices of the American Gladiators Orlando Live shows, when he was spotted and asked to try out for a Gladiator role. He took the position and became a worthy Gladiator, beating the Contenders in his favourite event Joust. His Gladiator career lasted for two years and during the show, he met fellow Gladiator Flame, they are now married.