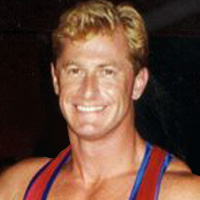 Cobra, a former body building champion from Exeter, England, has been crowned Mr Exeter 1986, 1987 and Jr. Mr Exeter 1983. His other passion is Speedway Motorcycle Racing. His team in the UK was known as the Exeter Falcons, they had the fastest track in the UK and it was the home to World Champion Ivan Mauger for several seasons. He competed at the 'Champion Speedway' in Owego, New York, as well as riding some demonstration laps at Plymouth on a visit to England.

He lives in Florida with his wife Julie and children Grace and Devon and owns a Speedway garage museum aptly named 'Cobra's Garage Mahal'.