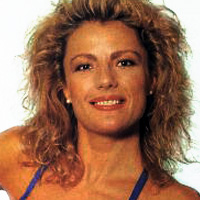 Lace was born in New Your City. Prior to becoming one of the original American Gladiators, she was pursuing careers as both an interior designer and the lead singer for an L.A. band called 'Ivy League and the Climbers' - she once even decorated Bruce Willis's house! In 1989, she auditioned for the role of tough and sexy Lace, she was the obvious choice and was one of the first female Gladiators to be chosen, and even featuring in the pilot episode.

Lace was easily one of the fan favourites throughout her three seasons on the show. She was often the first Gladiator to be seen signing autographs and posing for pictures. She was awesome in Assault; she once actually shot the Contender's ammunition right out of thin air! Although she was initially ineffective in the strength events due to her petite size, by Season Three Lace had bulked up and had become a formidable opponent in most events.

Outside of Gladiators, Lace made several guest appearances, including a brief spot on television shows 'Clueless' and 'Renegade'. Lace left the show prior to the beginning of Season Four, causing the producers to scramble for another Lace, played by Natalie Lennox.

Since leaving the show, Lace has posed for Playboy Magazine.