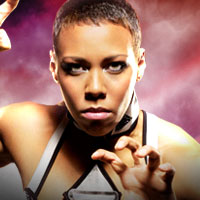 Beautiful, sleek and prowling, fierce and aggressive - the most powerful of them all.

Panther is a former Great Britain discus thrower having competed in the UK Championships and the Commonwealth Games in Melbourne in 2006. She has previously been ranked first in England and second in Great Britain. Panther also plays women's rugby and her job before becoming a Gladiator was a Children's day nursey manager.