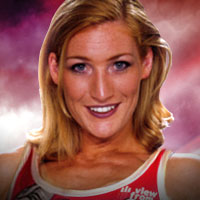 Siren played power-forward for the Scottish basketball team Polonia Phoenix, but she has played basketball since she was 11 years old. Siren has 15 caps for Scotland and first played for the national team at the age of 16. At 17 she played for Silver Lake High School, which was an American High School and Siren lived in the United States for a year playing basketball.

In 1994, Siren graduated from University with a first class Honours degree in Quantity Surveying and worked in Hong Kong. Siren also has a masters degree in facilities management.

She is also a member of an athletics club in Edinburgh, competing in the 100, 200 and 400 metre races, and has been winning in the top three positions. She is also a popular personality in Scotland, appearing on many television and radio programmes.

Siren has provided Gladiators with one of its most memorable moments. During an exciting game of Pendulum, Siren made a few unsuccessful grasps at the contenders flag, so she fixed her feet into the Pendulum's netting and let go with her hands. She managed to grab the contenders flag with seconds remaining. Siren was one of the most determined Gladiators ever!

Siren was part of the UK international team and went to compete against South Africa in the Springbok Challenge 2000. Since Gladiators, Siren focussed on her media career becoming a presenter for shopping channel QVC, BBC Radio Scotland and covering basketball for ITV Sport. She then went to work for Olympic medallist Brendan Foster's production firm Nova International, which covered the Great Run series on Channel Five.