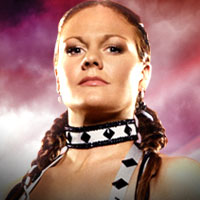 A weapon of war, domineering, aggressive and indomitable - a warrior queen.

Battleaxe was born in Whitley Bay, Tyne & Wear, England and she is the daughter of Scotland's 1970 Commonwealth Games hurdler Andy Webb. She graduated from Edinburgh University with a BSc degree in Mathematics.

Battleaxe was previously a spring board and high board diver and she is a professionally qualified dancer, specialising in ballet, tap and modern. She coaches trampoline, diving, gymnastics and athletics and she was an Ambassador for Glasgow's successful 2014 Commonwealth Games bid.

She is a patron for Meningitis UK after being struck down with the viral form of meningitis a couple of years ago. Battleaxe saw first hand how quickly the disease can strike.