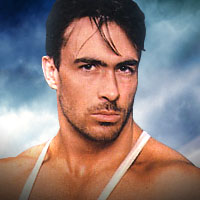 Trojan was a talented squash player from an early age. He was County Champion, received invitation into the National Squad Training Camp and competed in the World Open Under 19 Squash Championships. He also represented his district at rugby, javelin, discus and shot. However his direction changed to bodybuilding. Through a lot of hard work he transformed his 12 stone squash player's physique into a physique of a Gladiator!

Trojan was an all-round popular Gladiator, he was excellent in Powerball and Duel but especially in Joust, which he was unbeaten in throughout his Gladiator career.

He was respected for his 'Seeing Is Believing' attitude in the arena by contenders, fans and Gladiators alike. He spent time with his fans and also produced his own regular newsletter 'Trojan News' and wrote a book called 'My Life With The Gladiators'.

His dream of becoming an actor came true when he was chosen to play Action Man in a new 26 episode television series which was filmed in the USA. He retired from the Gladiators team to concentrate more on his career in Hollywood.

Trojan has a daughter, Ella, who's mum is also a famous former Gladiator- Zodiac. However, nowadays Trojan is married and lives in LA where he co-writes and stars in theatre productions.