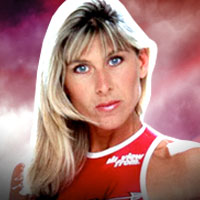 Amazon is a former Olympic and Commonwealth swimming champion. She has more than 200 British swimming records to her name and was awarded an MBE. She also won two gold medals at the Commonwealth Games in 1978 and in 1992 she broke her own 12 year old British 400 metre individual medley record.

On retiring from competitive swimming, she went on to present junior Gladiators show Train 2 Win but then her role changed when producers realised she would be a perfect Gladiator and suggested she tried-out, needless to say she passed with flying colours.

Amazon excelled in the aggressive events such as Powerball and Gauntlet, in which for the first time she could play part of a team, she also excelled in Duel, Pyramid and Tilt.

Her Gladiators career was unfortunately short lived after she snapped her cruciate ligament during Pyramid. After an operation and months of rehabilitation she returned for the 1996 Wembley Live Shows, but the knee swelled and another operation was needed, she could no longer compete in the show she loved.

Amazon, who has three children Elliot, Grace and Finley, went on to present The Big Breakfast on Channel 4 and also the 1996 and 2004 Olympic Games. She has also produced various fitness videos and books, as well as modelling.