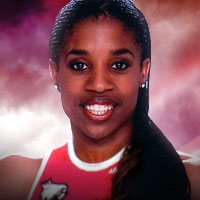 Rebel has been representing Britain in international athletics for over 10 years. She was a 200m Commonwealth Games finalist in 1986, and in 1988 after a highly successful number of meetings was a finalist in the 4x400m Olympic Games.

In 1996 she joined Gladiators, although she has continued with athletics, recording a personal best time of 23:55 seconds for the 200m. She also spent time training young athlete Vernicha James.

She is one of the most determined Gladiators, excelling in all of the events, especially Powerball, Pendulum and The Wall, in which she has only been beaten once. Her personality is vibrant, fiesty and she always spends time to talk and listen to her fans.

Rebel appeared in the Ridley Scott blockbuster movie Gladiator, which was filmed in Malta.

In 2001, she became a proud mother of Alicia and in 2005, Renee. Rebel is still heavily involved with track and field and sports promotion. She also has a keen interest in the well-being of other athletes and helped to set up a successful sports management agency.