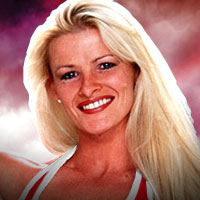 At six years old Lightning took up gymnastics after she was accepted into Lichfield Olympic Gymnastic Club. Lightning had her first competitive event when she was eight years old. In her time as a gymnast she competed all over Great Britain as well as in Bulgaria, Belgium and Germany. Between the ages of 10 and 16 she trained with the British Squad and gained 32 medals.

After gymnastics Lightning took up weight training and competed four times in the Miss Figure Bodybuilding competition and came second in the British Championship Finals. She also won the Willenhall BB Show, Muscle Beach Open and the EFBB British Qualifier. Next came aerobics to help build up her stamina. She was a fitness instructor for eighteen months.

Lightning is certainly one of the most toughest and determined of the UK Gladiators. She is known as the 'Queen of Hang Tough' remaining undefeated in the UK Arena. She has only ever been beaten once during filming of the first Ashes series in Australia.

Lightning gave birth to a baby boy called Lexus just three weeks before competing in the Gladiators arena for the 1999 series, herself and husband, Francis Betts, were overjoyed. They also have a daughter called Skye.

Lightning became a TV Presenter for kids show Room 785 airing on BFBS TV which is a channel for Britain's Armed Forces around the world. She then moved to Spain with Francis and the children but has since returned to the UK.