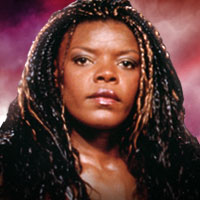 Nightshade was regarded as one of Britain's greatest all-round female athletes, competing in the Commonwealth Games, European Championships, World Championships and she is a three time Olympian.

Nightshade is also a First Dan Black Belt in Tae Kwon-Do. She also spends time working for the Duke of Edinburgh Award and is an Honorary President of the Women's Sports Federation. Nightshade was also awarded an MBE because of her sporting achievements.

Renowned as was one of the toughest female Gladiators ever, her determination was displayed during all of her performances. However, her particular strengths were in Duel, Pole-Axe and Suspension Bridge.

Unfortunately, she contacted a strong virus during filming in Australia for the Ashes series. After support from her husband Robin and fellow Gladiators she carried on in the show until 1996, but then decided she could no longer put in 100% to the show and that it was time to retire.