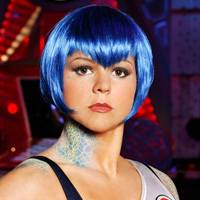 You won't see her coming but you will feel her strike.

Unblinking and slitheringly deadly, Viper will try to hypnotise her opponents and then crush them in her coils. She can stay very still and then, without warning, strike!

Cold-blooded and remorseless, every bout for her is an excuse to engage her instincts.

"I consider the Challengers as my prey," she says. "I like to toy with them before viperisng them."

With her royal blue head of hair and her snake-like appearance, she slithers quietly, ready to pounce on her unsuspecting opponents.

"I'm a very colourful character, both in attitude and appearance," she says.

Like the venomous snake she is named after, she can strike fear and dread in anyone she encounters.

"You won't see me strike but you'll feel it," she says. "I can be cunning with my actions and words. The Challengers should fear coming up against me."

Hypnotic, sly, aggressive and charming, Viper is a natural at playing the Pyramid, Suspension Bridge and Powerball.

"But I enjoy all the Gladiator games as I'm a born competitor," she says.