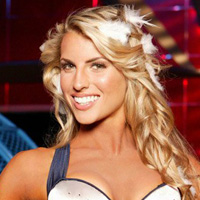 Descended from heaven - and ready to fly!

When it comes to the heavenly Angel, she thrives on the old adage "looks can be deceiving".

This feisty competitor, who mixes martial arts with magic, is not only graceful on the games, but gracious in both victory and defeat. But beneath her angelic exterior lies a fierce fighting spirit that brings out the best in her Challengers.

"I always compete with a pure heart, integrity and am motivated to see my Challengers push themselves to new heights," she says.

While she has a peaceful and serene demeanor, her Challengers fear her fighting spirit, expert skill and astounding strength.

She rules the skies and is at home on the aerial games, such as Hang Tough, Pendulum, Vertigo and The Wall, where she can soar, swing, chase and climb.

"The energy of the crowd helps me fly and spurs me on to defeat the Challengers without fear or hesitation," she says, adding she acknowledges the crowd's support while playing with 'Angel kisses'.

"Historically, Gladiators performed to please the spectators, so without an audience the Gladiator is nothing. I particularly love it when I spot other angels in the crowd," she enthuses.