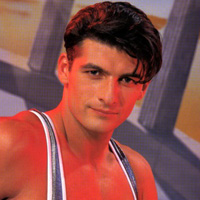 Tornado is as his name suggests "a powerful phenomena with destructive force". Years of high school athletics have conditioned him to the level of competition that Gladiators demands.

Tornado hails as a champion long and triple jumper as well as a lightning quick sprinter but don't be fooled by his good looks as this Tornado possesses the explosive power and speed needed to chase and catch even the fastest of Challengers.

Challengers dread the fact of knowing that only a few metres behind them, on Pursuit or Skytrak, the awesome acceleration of Tornado is just waiting to be released. He'll wipe out anything in his path if he gets the chance!

When not flying up The Wall, Tornado can be found snow skiing, Jet skiing or cruising on his motorcycle.