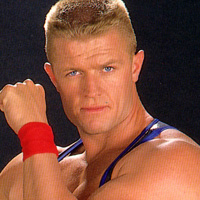 Tower is big; the epitome of a Gladiator, towering over the opposition at more than 1.9 metres and backing it up with 110 kgs of pure muscle power. This level of fitness requires dedication and discipline - Tower learnt both well during nine years with the RAAF.

He regards his major advantages to be quickness and strength. These attributes are honed with running, sparring, surfing and up to five days a week in the gym. Tower has played both rugby league and union but is happiest in one-to-one combat sports such as kick-boxing which he also teaches.

His heroes? "Anyone who is a success in their chosen field." Tower travels the road of personal freedom on a Harley Davidson.

And for relaxation? Keeping up with the news on TV.