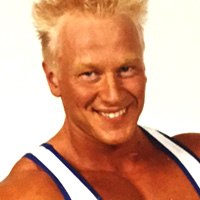 Turbo was a very diverse Gladiator, his strengths ranging from The Wall, Danger Zone and Hang Tough. An experienced bodybuilder, Turbo was fast and agile, and definitely the showman of the Finnish Gladiators series.

His favourite events were Conquer (the wrestling part of Breakthrough & Conquer) and his least favourite was Atlaspheres.

He is married to fellow Finnish Gladiator Cobra, whom he met before the series, and they have two daughters Jennifer and Victoria. Turbo works as a building engineer and personal trainer, specialising in competition preparation and training, aiming at competing in physique shows.