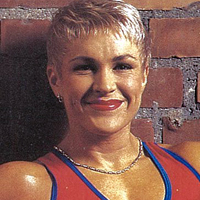 Competing as a Contender in Series 1, Minna reached impressed the producers and was called back to perform as Gladiator Safiiri. Although she broke her arm during Breakthrough, she recovered to excel in the third series. Her best events were The Wall and Duel.

Safiiri is a professional bodybuilder and currently works as a physiotherapist.