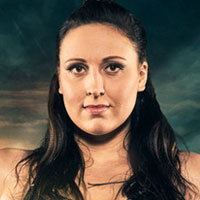 Hurrikaani arrives in the Gladiator arena like a whirlwind. She stops her opponents with force and is not afraid of physical contact.

In the spring 2017, Hurrikaani won the Finnish championships in basketball with the team Hyvinkään Ponteva. She's a basketball player to her core. She started at 6 years old, played in the junior team in Helsinki, the national team in her teenage years, got three Finnish championships in girls' A league, and moved onto the women's national team. Hurrikaani has played in Germany and Spain as well.

"I've always been athletic and good at sports. I'm multifaceted and skilled in everything - except ballet", laughs Hurrikaani.

Her strength as Hurrikaani comes from her background as a defender in team sports. Thanks to her height, it's easy for her to block her opponents from scoring. "Even though I'm tall, I'm surprisingly quick. If a little pipsqueak ends up in front of me, she'd better be ready to get tossed aside."

She joined the Finnish Gladiators (Gladiaattorit) line-up in 2017 and had an unbeaten record in most of her events - specialising in Earthquake and Pyramid.

Due to her prior basketball commitments, Hurrikaani was sadly unable to return for the 2019 Finnish Gladiators series. Outside of sport, she is training to become a make-up artist.