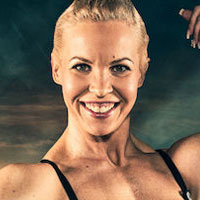 "I train a couple of times a day, and I have that 'no days off' mentality even though nowadays my life is a more free than when I was competing", says Salama.

Salama has over 15 years of professional sports behind her, and she's collected Finnish, Nordic, European and World Championship medals. In bodybuilding and weightlifting Salama has World Championship gold and the Overall title. Salama became a bodybuilder thanks to Finnish Gladiators (Gladiaattorit). Marjo Krishi, the original Salama (aka Flash), was her idol.

"I rewound the VHS tapes of the Gladiators so many times! Marjo was, and still is, an icon in the bodybuilding world, and there's no other like her. Marjo and I are the only Finnish women who have won the Overall-World Championship title", Salama says.

Salama, 2017 became a member of the Finnish Gladiators (Gladiaattorit) line-up and mastered the events Powerball, Pyramid and Gauntlet.

During her one-year stint as a Gladiator, mother of two Salama, fell in love with contender Jesper Nyberg and the two are expected to get married in the near future. She also is a group fitness instructor, posing coach and IFBB judge.