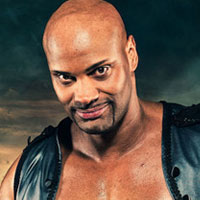 Swedish-born Terminaattori is a strong hero who clears his path of obstacles - but also a flirt and a charmer who loves attention and does not forget the audience - always entering the Gladiators arena with a rose for a pretty lady.

"I want to inspire the younger people in the audience and by the TV's to get involved with sports", says Terminaattori.

Terminaattori describes his childhood: "In my childhood in Hanko (the southernmost city in Finland), there were only two options: either hang around on the streets or do sports. I chose sports and I tried all the events that you could choose at Hanko at that time." Sports has always been his passion. Martial arts, football, handball, volleyball, badminton, American football, and bodybuilding have been tested, not to mention his ongoing fitness training.

Despite having confidence and charm, this hasn't always been the case for Terminaattori. As a child, he suffered from the autoimmune disease alopecia and sporadically lost his hair and eyebrows until the age of 18 when he decided to embrace his condition by shaving it off.

Terminaattori is also remembered as one of the handsome and charismatic men in the dance show group 'Scandinavian Hunks' (of which he is one of the founding members). He has also previously worked as a model, doorman, and bodyguard.

In 2017, Terminaattori joined the Finnish Gladiators (Gladiaattorit) and he made the Pyramid his specialist event. Sadly Terminaattori injured his shoulder during his first and only series and missed a number of shows. Unable to return to the series in 2019 due to recovering from injury, he continues to work as a personal trainer in Helsinki.