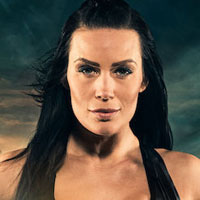 Pantteri is agile, quick and strong - but also cunning like a cat and she keeps her claws sharp! Pantteri has a strong background in track and field. The sprinting events (100-meters and 200-meters) were especially close to her heart when she was younger, as was equestrianism.

These days Martina trains her stamina in triathlon, which consists of swimming, biking and running. She's a bodyweight workout trainer, personal trainer, and has studied nutrition. She loves action-packed workouts. "When I hit the gym, I always have a goal that I aim at. I never go to the gym only for the gym itself, it has to support my three main events", Pantteri says.

She started her career as a beauty pageant contestant, winning the Finnish titles of the 2001 Miss Earth and the 2004 Miss Hawaiian Tropic. She also ranked twice as a semi-finalist in the 2000 and 2001 Miss Finland pageants.

As well as being a Finnish model and singer she is also an established television personality, appearing in shows such as Big Brother Finland, The Stars of the Jungle (Viidakon tähtöset), and a small role in the Finnish soap opera Secret Lives (Salatut elämät). She has also founded her own dance group 'Dazzling Ladies', which toured across Finland.

Pantteri joined the Finnish Gladiators team in 2017 and proved herself to be a solid alrounder who competed in most of the events. Her specialist event was the Suspension Bridge.