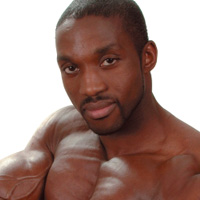 There's more to Warrior than meets the eye, he's courageous, brave and compassionately wise. If it's 100m or 200m he will sprint away, on rugby fields he's player of the day, and on Judo mats of war, his honoured belt of black takes precedence of them all! This perfect blend of brains and brawn, a magic mix of heart and soul is testament that one Warrior does have it all... not only crowned Mr Gauteng in 1998, selected as one of the top 40 men to compete at the 1998 World's Strongest Men contest and voted the sexiest sportsman in all of South Africa in 2001, Warrior is also a highly successful businessman and, together with fellow Gladiator, Giant, headed a project called 'Power Kids', empowering the South African youth to conquer sport, education, nutrition and social peer pressure problems.

In 1994, Warrior was selected for his schools National Rugby Team and participated in the All Africa Games '95 in judo and 100m. Warrior was also crowned the Junior Champion bodybuilder in 1996 and achieved second place in the Northern Transvaal bodybuilding contest in 1998.