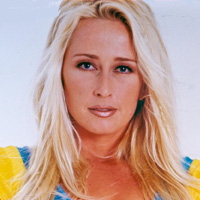 Born in 1967 in Miami, USA of a Red Indian father and Swedish mother, Christy Skoglund better known to MTN Gladiator fans as Sahara, won her way into the hearts and souls of many South Africans, before tragically passing away from an aneurysm that had caused a severe brain haemorrhage on the 3rd June 2001.

A part of the Gladiator scene since competing in the International Gladiators series in Birmingham, England in 1995, it was always going to be only a matter of time before the crowds flocked to the Standard Bank arena to watch the 1.85 meter tall blonde take on South Africa's leading contenders in MTN Gladiators.

While extremely passionate and proud to be a MTN Gladiator, Sahara always looked to the future. "My next step is to settle down and build my dream house, live in Europe and the Americas (6 months of the year). Write a book. Do some motivational speaking, maybe a talk show. Buy a yacht and sail off into the sunset..." she said shortly before her tragic passing. Sahara will always be a champion in the eyes of her faithful MTN Gladiator fans that she so adored.

Sahara, the Queen of the Desert, Queen in every sense of the word, was South Africa's most experienced Gladiator having been with the team since it's inception and has competed against the American, Australian, Russian, German and British Contenders. Growing up in Sweden meant sport, and lots of it! Athletics, soccer, basketball, swimming and horse riding to name just a few. She moved to USA at the age of 19 and embarked on a lucrative and worldwide modelling career. She has won international modelling awards and was voted finalist in Model of the Year, amongst others. Five successful years in the corporate world meant this Gladiator had a whole lot of brains, not only brawn! She lived in South Africa on and off for many years and considered it as her home. She loved keeping fit and healthy and family and friends were very important to her. Travelling and riding her customised Harley Davidson were just two of her many hobbies.

MTN Group Executive, Dr Yvonne Muthien, says the management and staff of MTN wish to express their profound sadness at the devastating illness that has struck Christy Skogland, more popularly known as the Gladiator, Sahara.

"Sahara has always been a fine example of fitness and health, which makes her sudden illness even more tragic," says Muthien. "She has been one of the most popular Gladiators since the show first started, and has been an important role model for thousands of young people. Her generosity and willingness to help those less fortunate than herself are well known, as well as her sparkling sense of fun."

Muthien says, "Our thoughts and prayers go out to her fiancé and family. We know that they will be supported and sustained by the overwhelming messages of sympathy and concern that have been pouring in from Sahara's fans around South Africa."