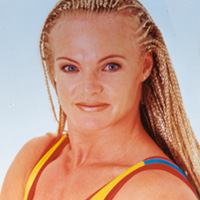 Quartz was born in Durban and grew up on a farm in the Natal Midlands. She is the 1997 South African Novice Bodybuilding Champion in the heavyweight division. Quartz has been involved in sport her entire life having played 1st and 2nd team school hockey and earning Natal School Colours for athletics. She won the 1998 Natal Open Bodybuilding champs and was placed fourth at the SA's.