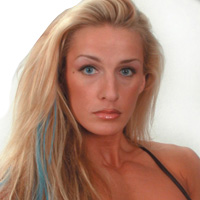 In 2001, Fox had found a new hunting ground... South Africa! After being voted toughest Gladiator by the production team during the UK vs. South Africa series in 2000, she was signed up for the fifth series of MTN Gladiators.

Aside from her achievements in the British Gladiator arena, Fox was recently placed second in the Miss World Natural Physique Competition and also held the title of the Fittest Woman in Britain.

No blood hounds can seek her and track her down, she's clever and smart and knows her way - her precision in kickboxing is unsurpassed and watching her climb is a pleasure to see.

She revs up her motorbike to thunderous applause and can lift weights that defy all gravity laws! She's a vixen at play and will outfox contenders all day.

With fellow MTN South African Gladiator Giant, she was the co-publisher and editor of the health and fitness publication 'M Magazine'.

Since returning to the UK, Fox is now married to Rob and has two children. She is the Head of Retail Academy for The Body Shop.