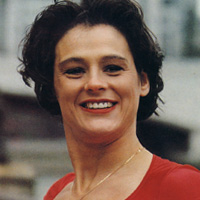 Prior to becoming a team coach, Eunice had briefly transformed into a Gladiator known as Blaze during the Gladiators Sheffield Live shows in 1995. She stepped away from her role as a Gladiator to defend her champion Contender status during

She went on to become a stuntwoman, starring in films such as Golden Eye, Avengers and Titanic, to name only a few.