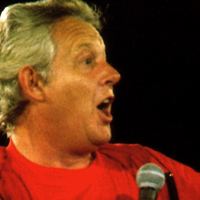 Bobby Bragg began his showbiz career as a comedian and compere, appearing in summer seasons and pantomimes. Highlights of his career include a Royal Variety gala in the presence of HRH The Princess Margaret and an American television special from the London Palladium. He has made many other television appearances ranging from Bergerac to Bullseye. Bobby specialised in warm-up routines for more than 6,000 television shows, including Gladiators, Keeping Up Appearances, The National Lottery, Family Fortunes, Who Wants to Be a Millionaire, Harry Hill's TV Burp and Only Fools & Horses, to name but a few. He was also known as the voice over of Supermarket Sweep.

His most recent TV acting credit was playing barman Don in the Only Fools And Horses prequel Rock & Chips between 2010-2011. Bobby was awarded the Lifetime Achievement Award at the British Music Hall Society's 51st Annual Ball in 2014.

On the 25th October 2016, Bobby sadly lost his brave battle against battle with pancreatic cancer, defying his original 9 month terminal diagnosis by more than two years. He passed away peacefully with his family. RIP Bobby.