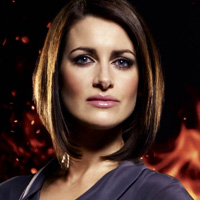 Kirsty graduated from the London College of Fashion and is the daughter of the former Ryder Cup captain Bernard Gallacher. She went on to work as an editorial assistant for Sky Sports. Her television presenting career started on Sky Sports News and Soccer AM. She then presented her own show 'Kirsty's Home Videos' and 'TV Meltdown' for Sky One as well as becoming one of the original presenters for Channel 4's 'RI:SE' and co-hosting 'Simply The Best' for ITV.

In 2005 Kirsty competed in Channel 4's 'The Games', in which she won gold, and then returned to co-host the next series in 2006. Kirsty has hosted a number of sports shows including Sky One's 'All Star Cup', co-presenting 'Only Fools On Horses' for Sport Relief on the BBC and various shows on BBC's Five Live. She has co-hosted a celebrity boxing match between Ben Shepherd and Lemar for Sport Relief 2008 and is also a regular presenter on The National Lottery (BBC) and the Ant v Dec feature of 'Ant & Dec's Saturday Night Take Away' (ITV) which actually featured a Gladiators special in 2005.

In December 2006, Kirsty celebrated the birth of their first child, Oscar, followed by her second son Jude in January 2010.

Since Gladiators, Kirsty has returned to Sky Sports to present for Sky Sports News and competed in the 2015 series of BBC's Strictly Come Dancing.