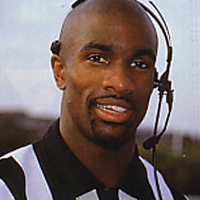 During his athletic career, he held the British record for the 400 metres sprint, and won gold medals in the 4x400 metres relay at the World Championships, European Championships and Commonwealth Games, although his career was sadly blighted by a series of injuries.

In 1994, Derek was married to the British Olympic swimmer Sharron Davies, who starred as Amazon in Gladiators. They divorced in 2000 but the couple have two children, Elliott and Grace.

Derek currently does motivational speaking on the conference circuit, inspiring people with the story of the 4x400 gold medal triumph and his famous ordeal in the 1992 Barcelona Olympics. He currently co-owns a Superbike Team and in 2011 he married Maria Yates.