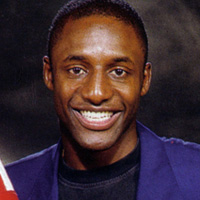 Footballer and martial arts expert Fash presented the show between 1992-1996 and made a welcome return for the final series in 1999. Famed for his 'Awoooga' catchphrase, Fash was the 1993 Gladiators Celebrity Champion. He has gone on to star in I'm A Celebrity... Get Me Out Of Here! and became an International Spokesperson for UNICEF.