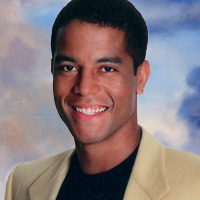 He was once surprised during the filming of Gladiators by Michael Aspel when he was presented with This Is Your Life book. He also presented the series Body Heat and Top Score.