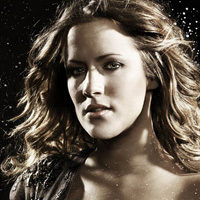 Caroline Flack first came to public attention presenting the International Pepsi Chart Show before moving to Channel 4 and starring in Bo'Selecta! playing Michael Jackson's long-suffering girlfriend Bubbles. In 2005, she went on to present links between videos on E4 Music and The Games: Live At Trackside on E4 alongside Justin Lee Collins. In 2007 Caroline hosted the CBBC coverage of Comic Relief Does Fame Academy and more recently hosted a week of Big Brother's Big Mouth. Caroline also co-presented Live at Indigo2, and the Saturday morning show TMI with Sam Nixon and Mark Rhodes.

In 2009, Caroline replaced Kirsty Gallacher as the presenter of the second series of Gladiators on Sky One, alongside Ian Wright. She went on to present ITV2 spin-off shows I'm A Celebrity... Get Me Out Of Here! NOW!, alongside Joe Swash and Russell Kane, and The Xtra Factor, with singer Olly Murs.

Caroline went on to win the twelfth series of BBC's Strictly Come Dancing in 2014 with her dance partner, Pasha Kovalev. The following year, in 2015, she began co-presenting ITV's main X Factor show for one series, alongside Olly Murs.

Taking over as host of ITV2's hit dating reality series Love Island when it was relaunched in 2015, Caroline became the face of the show and it took her to the peek of her presenting career. Caroline presented 5 series of Love Island, including spin-off show Love Island: Aftersun, with it going on to become one of the most-watched reality shows in the UK.

In 2018, Caroline and the Love Island team won a BAFTA Award for Best Reality and Constructed Factual Show.

A talented singer and dancer, Caroline made her West End stage debut playing Roxie Hart in Chicago in 2018, having previously appeared on stage in a touring version of Crazy For You.

On the 15th February 2020, Caroline was tragically found dead in her London home after taking her own life. RIP Caroline.