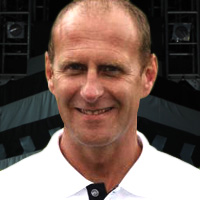 Joining John Coyle is Hugh Watkins who takes on the new role of video referee in Gladiators. A former professional international referee, Hugh officiated at the top level of rugby union for the best part of ten years.

A vastly experienced official he has participated in virtually every elite level tournament in the game including the 2007 World Cup in France, RBS 6 Nations, Tri-Nations, Heineken Cup and World Series Sevens as well as being listed on the IRB referee, touch judge and TMO panels.

Although injury prematurely ended his playing days it opened the door to a twenty year spell as a referee and that experience and expertise has in turn led to a burgeoning career as a technical and performance consultant with teams including Worcester Warriors in the Guinness Premiership.

Away from the pressures of professional sport Hugh has also worked as a secondary school teacher.