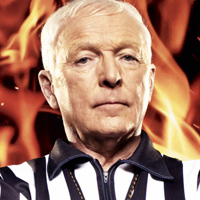 John was National Coach for the Amateur Athletics Association of England and subsequently the first full time National Coach in Scotland between 1965 - 1970. He was coach to an Olympian at every Olympics from 1964 to 2000 and has coached 5 world record holders and 170 GB Internationals in every event.

John was also Director of Training for the original Gladiators show during all 8 series and in 2008, he briefly resumed his role as referee on the newly revived Gladiators on Sky 1. Since Gladiators, he has gone on to become a mentor and coach for a number of recent international athletes, including Great British athlete William Sharman (who assisted John in the role of timekeeper in Gladiators 2008), who he helped transform from a decathlete to a world class sprint hurdler, and he continues to coach at a local and regional level.