Gladiators returning to TV in brand new home on the BBC

Everything we know about the new series...


TV's Gladiators is set to return to TV screens in the UK three decades after the very first episode aired. It has been officially announced that the iconic family entertainment show will be brought back, but this time to the BBC, by Hungry Bear Media and MGM Television UK in 2023.

The much loved series will be back with an 11-episode series and will welcome a brand new generation of superhumans who will compete against contestants in the ultimate test of speed and strength.

The new series will include brand new games alongside classic challenges, culminating at the end of each episode with fan favourite The Eliminator.

Want to be a Gladiator or Contender?

Anyone interested in being a Gladiator or Contender can apply now.

The new series will be recorded in 2023 at the Utilita Arena Sheffield, rather than the show's original home of the National Indoor Arena, Birmingham (now known as Utilita Arena Birmingham).

Gladiators is back, and a whole new generation of viewers can now look forward to watching a Saturday night spectacle like no other. Will the contenders have the will and the skill to succeed against our mighty new Gladiators? You’ll have to tune in to find out!

Reactions from the original Gladiators...

GladiatorsTV.com's podcast The GladPod, hosted by Jet (Diane Youdale), has recently covered the news of the reboot.

Special guests included Hunter (James Crossley), Scorpio (Nikki Diamond) and her daughter Emily Diamond, who has hopes of becoming one of the new Gladiators!

Emily, who could aptly be called Diamond, has also recently been training with legendary Gladiator Hunter. Will she have the skills to scale The Wall as well as her Mum, Scorpio? It certainly looks like it!

Jet discusses how she would love a role as a pundit on the new series, whilst Hunter, who achieved 'Ultimate Gladiator' status on the original ITV series, says he could possibly be tempted to pull on the lycra and compete once again!

They also speak to 5 of the biggest Glad Fans about exactly what they would like to see from a brand new version of Gladiators.

Listen to the podcast episode:

Three of the legendary Gladiators from the original ITV series, Hunter (James Crossley), Lightning (Kim Betts) and Saracen (Mike Lewis), recently caught up with Josie Gibson and Craig Doyle on ITV's This Morning to discuss the reports of the new show, and take a trip down memory lane...

Lightning also appeared on BBC Breakfast, along with Amazon (Sharron Davies), to talk about the revival with Naga Munchetty and Charlie Stayt.

Asked if she would like to be involved, Lightning added: "That is a big question. I mean, I'm 50 and I'm one of the younger Gladiators... Do people want to see a 50-year-old running around in a bikini?

"But it would be lovely to take part and try and help it be as successful as what it was."

Who will present Gladiators?

At the moment, who will present Gladiators has yet to be confirmed.

It has been reported that Holly Willoughby could be lined-up to host the brand-new series of Gladiators. Holly was a massive fan of Gladiators in the 90s and went to see the show recorded twice!

The Sun suggests that Arsenal legend Alex Scott has been having secret talks with the program makers. Gabby Logan and Davina McCall are also said to be in the running.

However, the latest tabloid reports suggest Bradley Walsh, and his son Barney, could be hosting the new series. Bradley is no stranger to Gladiators; he competed in the Celebrity version of Gladiators in 1997. His wife Donna, Barney's mum, was also the leader of G-Force - the Gladiators' very-own cheerleading squad!

The hosts and new Gladiators team will be announced in the near future.

You can apply to be a Gladiator or Contender here.

Recording of the series is taking place in 2023 at Utilita Arena Sheffield. More information on audience tickets will follow as soon as it is released.

History of the Gladiators

Originally airing for 8 seasons between 1992 and 2000 on ITV, each episode saw 4 Contenders compete against the show’s Gladiators in various Events, such as Duel, Hang Tough and Pyramid, to reach the series grand finale. The show was presented by Ulrika Jonsson throughout its original run, alongside John Fashanu and Jeremy Guscott. John Sachs provided commentary, while John Anderson refereed the events. Gladiators attracted over 14 million viewers at its peak.

The show enjoyed a brief, two-season revival between 2008 and 2009, on Sky One and was presented by Ian Wright, alongside Kirsty Gallacher and Caroline Flack.

Gladiators has also enjoyed various spin-offs, in countries such as the USA, Finland, Australia, Sweden and South Africa. There were also four seasons of a children's version 'Train 2 Win' between 1994-1998 which was broadcast in the UK on CITV. 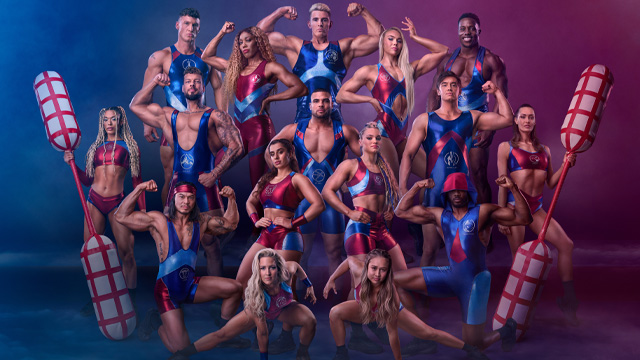 Applications for new Gladiators and Contenders are now OPEN!