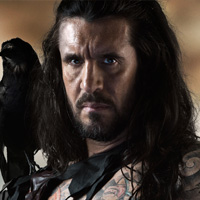 Tor is the arena's giant and noble savage. This seemingly wild and gigantic Gladiator strikes fear in the hearts of his opponents with his size and fearsome gaze. But his hard surface is just a facade for the purpose of intimidating his opponents. Beneath the surface lies a calm and quiet warrior who is fighting hard but not harder than necessary. If the opportunity arises, he loves to play around with his opponents.