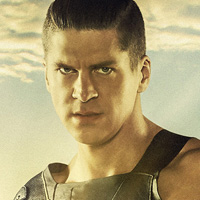 Prime is the police of the arena. This just and principled Gladiator has taken it upon himself to ensure that all rules are followed and he follows them to the letter. He fights in the arena just to show how to do it fair, but that doesn't mean that he doesn't fight to win. His respect for the laws and rules are surpassed only by his desire for victory.