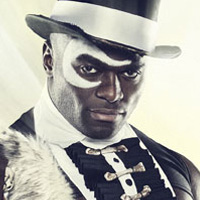 Baron Samedi is the arena's voodoo master. This mysterious Gladiator strikes fear into his opponents with his spooky mask and his voodoo magic. He fights as if he was possessed by the strongest spirits and doesn't stop fighting until they have left him. He claims to take a piece of his opponent's mojo, and thus becomes stronger and stronger after every victory.

Baron Samedi is no stranger to the Gladiators arena after successfully winning the fifth series of Swedish Gladiators in 2004 as a Contender.