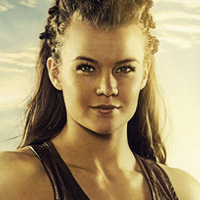 Formed of the hardest mountains in the north, this Viking Gladiator has a body of granite, a heart of gold and a willingness to fight with the hardest steel. Bjørk has speed that will dazzle and stun the Contenders, who will often stand with gaping mouths when they realise what powers she possesses. Bjørk has a serene exterior, but it is there to fool her challengers into underestimating her, then when they realise, then it's already too late.