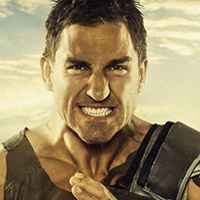 Pansar is the arena action-man and tough guy. This Gladiator has a soldier's endurance, has been elite trained and fights like hell. He is fighting for king and country but always with a twinkle in his eye. For him, the Gladiatorial games is his playground where he can do what he likes best, to fight, win and give the audience a good show.

Originally known as Attila in the fifth series of the classic Swedish Gladiators series, he has returned tougher and angrier than ever as Pansar! Contenders Beware!